The NACSW K9 Nose Work Model was inspired by the model of working detection dogs. K9
Nose Work was created to provide companion and sport dogs a joyful outlet for their innate
hunting and scenting abilities. The ultimate goal with your dog is to build the willingness and
desire to search independently for the odor source and communicate clearly to you the handler
when they have found it. The dogs will use their sense of smell to seek out specific odor
sources, whether food, toy, or target odor, in defined search environments.

While providing mental enrichment and physical exercise, K9 Nose Work can also build
confidence and reduce environmental sensitivity in a dog. We are looking to develop the dog’s
independent hunt drive and the dog’s willingness to solve problems without relying on their
handler to tell them what to do.

Unlike some other scent-detection training methods, the K9NW methodology initially focuses
on a primary reward (food or toy) and self-reward in order to build the dog’s independent
hunting and problem-solving skills without handler interference. If and when a target odor is
introduced, it is done by pairing the dog’s primary reward with the target odor.

Intro to NACSW K9 Nose Work: The “Intro” class is designed for dogs that have had no formal
K9 Nose Work training. The class will introduce you and your dog to the “game,” build handler
observation skills, and get dogs focused on searching. We will focus on the foundational skills
to help handlers read their dogs and build the dog’s intensity for searching. The Intro class
focuses on using Primary (food and or toys) and cardboard boxes. This method makes it easy
for all dogs to enjoy K9 Nose Work and makes it easy to practice at home.

Intro to Odor NACSW K9 Nose Work: This class follows the “Intro to K9 Nose Work” class. We
will continue to build a strong foundation for the “game.” Both “primary” (food and toys) and
Odor (introduced) will be used to further develop your dog’s skills. The timing of the
introduction to odor will vary from dog to dog. We must maintain the dog’s drive and continue
to instill the importance of self-discovery and self-reliance. Introducing odor also brings about
advancing the handler’s observation skills and ability to work as team with their dog.

Advanced NACSW K9 Nose Work: This class is for dogs that are currently already working on
target odors. Students at this level may or may not be competing, but have experience
working on target odors. Puzzles, Mazes and other challenges will be presented to the dog

Karen Kay owns Kay9 Nosework and Kay9 Fitness in Deerfield, NH. She is currently in the
Instructor Certification Program for NACSW, and is developing a network of beginner and
advanced K9 Nose Work classes.

Karen is certified by the Karen Pryor Academy and is a KPA-CTP dog trainer. She is also a
certified CCFT in canine fitness. Before going completely to the dogs, Karen spent 30 years
coaching human athletes to the Olympic level. And she believes the key to success at the
highest levels is all about the foundation skills. With humans and with dogs, Karen’s patient
approach and sense of humor keep Nose Work classes active and fun for dogs and their humans at all levels.

Karen owns an Australian Koolie named Kazi, a rescue Staffy/Jack Russell mix named Comet,
and a 15yr old beagle mix named Taffy who does whatever she wants. She also lives with two
border collies. The family is active in several dog sports including nose work, agility, obedience
and disc 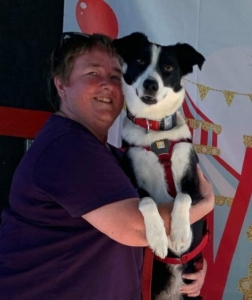 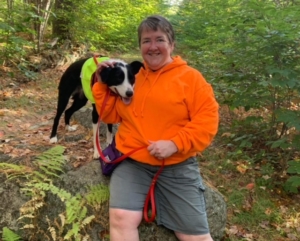 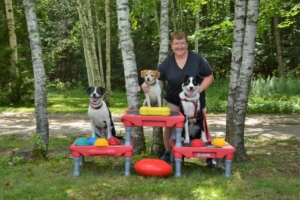 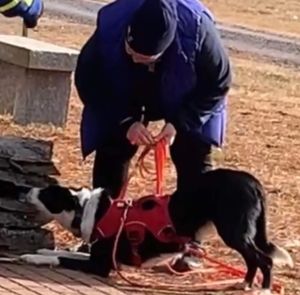 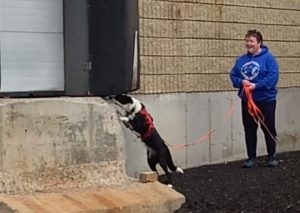